Written by John JamesScroll down to see more content

It will, perhaps, be asked, whether I would shut up every married woman within the domestic circle, and… confine her to her own home; or whether I would condemn and degrade her to mere household drudgery. I have, I think, protected myself already from this imputation, by representing her as the companion, counselor, and comforter of man. She shall,  with my consent, never sink from the side of man, to be trampled under his feet. She shall not have one ray of her glory extinguished, nor be deprived of a single honor that belongs to her sex; but to be the instructors of her children, the companion of her husband, and of the queen partner of the domestic state, is no degradation – –and she only is degraded who thinks so!

But may not woman, in every way in her power, benefit society by her talents and her influence? Certainly!

Christianity has provided a place for woman to which she is fitted and in which she shines. But take her out of that place and her luster pales and sheds a feeble and sickly ray! Or to change the metaphor, woman is a plant, which in its own greenhouse seclusion will put forth all its brilliant colors and all that sweet perfume. But remove it from the protection of its own floral home into the common garden and open field where flowers will grow and thrive, its beauty fades and its fragrance is diminished.

Neither reason nor Christianity invites woman to the professor’s chair, or conducts her to the lawyer’s bar, or welcomes her to the pulpit, or admits her to the place of the magistracy. Both exclude her…from the violence and evil of the military, the debates of the Senate, and the pleadings of the forum. And they bid her beware how she lays aside the delicacy of her sex, and listens to any doctrines which claim new rights for her; or become the dupe of modern reformers or fashionable journalists.

The Bible gives woman a place of majesty and dignity in the domestic circle – the heart of her husband and the heart of her family. It is the female supremacy in that domain, where love, tenderness, refinement, thought and tender feeling preside. It is a woman’s privilege to make her husband happy and honored, and to make her sons and daughters the ornaments of human society. It is the sphere of piety, prudence, diligence, and the domestic station, and a holy and devout life. It is the sphere that was occupied by Hannah, the mother of Samuel; by Elizabeth, the mother of John; by Eunice, the mother of Timothy; and by Mary, the mother of Jesus. It is the respect and esteem of mankind.

A woman who fills well the sphere assigned to her, i.e. as a wife and mother, who trains up good citizens…, and the good fathers and mothers of other families which may spring out of her own; and so from generation to generation in all but endless succession, mothers need not complain that their sphere of action and their power of influence are too limited for female ambition to aspire to. The mothers of the wise and the good are the benefactors of the human race.

Christianity has provided a place for woman for which she is fitted, and in which she shines; but take her out of that place, and her luster pales and sheds a feeble and sickly ray!

What would be gained with regard to woman’s comfort, respectability, or usefulness, or to the welfare of society, and how much would be lost to each by withdrawing woman from her own appropriate sphere? What gain is it to introduce her to that for which she has no adaptation? Who but a few wild visionaries and rash speculators, and mistaken advocates of ‘women’s rights’, would take her from the home of her husband, of her children, and of her own heart in order to wear out her strength, consume her time, and destroy her feminine excellence in committee rooms, on platforms, or philosophical institutions?

But may not woman, in every way in her power, benefit society by her talents and her influence? Certainly! In every legitimate way woman may help and benefit society. Her sphere is clearly assigned to her by God. Woman can be spared from the lecturer’s chair, the platform of general convocation, and the scene of public business. But she cannot be spared from the hearth of her husband, and the circle of her children! Substitutes can be found for her in the one, but not in the other. In the bosom of domestic privacy, she fulfills with truest dignity and faithfulness the first and highest obligations of her sex. 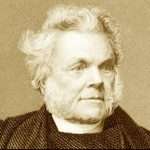 John Angell James was an Enligsh Nonconformist preacher and writer who deeply influenced the young CH Spurgeon. His preaching was highly popular, continuing the defense and proliferation of conservatism and Calvinism in the late 18 and early 1900s.

Should We Condemn Privilege?