Previous Next
Antidote to the Liberal Principles

The evil that Guizot was speaking of at the time was none other than Democratic idolatry; revolutionary liberty and equality were destroying every social relation. “Chaos is concealed nowadays under a single word: Democracy . . .

. . . We have supposed ourselves to be better than we are; we have miscalculated the evils inherent in our nature. We thought we were stronger than we really are; we have not simply miscalculated the limits of our strength, but the rights of that sovereign power that governs both us and our world. We have left out of our reckoning those eternal laws that God gave us, and we foolishly tried to replace them with laws of our own devising, . . .

It is regrettable that, even today, many Christians, disillusioned by the promises of liberalism, nevertheless believe that they can take on board its principles, in whole or in part, to serve the cause of religion and freedom. It is regrettable that they have not discovered, under the misleading veil of seeming moderation, the identity of principal with a radicalism that strikes at the very heart of religion in society, thus making them the blind instruments of ”the hidden power that irresistibly draws the consequences from the principal, never suspecting that they are engaged in its fatal development.”

The Revolution, or modern philosophical theory, undermines every law of human existence, because it undermines Christianity. Herein lies the peculiar character of our time.

Indeed, what we are witnessing is one of the most terrible phases of that perpetual and mysterious war of which Scripture alone gives us the key. The Bible, which contains the history of the past and the future, recounts and reveals the complete destiny of humanity. The plan of a just and good God for restoring fallen man unfolds majestically down through the ages. Under His Almighty hand events are shaped and molded to a single end: the formation of an elect people, a spiritual nation, saved by the blood of the cross, and of a church militant here below and a church triumphant in heaven. The Revolution is simply the systematic undermining of the church of Jesus Christ; and a genuinely anti-revolutionary resistance to it is simply a perpetual witness to the Faith, in a form dictated by our time. It is the Christian principle and its lawful, necessary and timely application.

The history of a revolution, the starting point of which is contempt for revealed religion, and the outcome of which is denial and doubt, would find a worthy motto in Pascal’s lines: “All who seek God apart from Jesus Christ find no light that satisfies or is of any use. Either they do not come to a knowledge of God’s existence, or, if they do, this knowledge is of no use to them. Because all they can do is establish, without a mediator, their own means of communication with this ‘God’ whom they know without a mediator. So they end up in atheism or deism, both of which are abhorrent to Christianity, and equally so. In Jesus Christ we find all our happiness, all our virtue, all our life, all our light, and all our hope. Apart from Him, there is nothing but vice, misery, darkness, and despair; and we can see nothing but darkness and confusion in the nature of God and in our own nature.” It is equally applicable to state and society. If we follow the way of unbelieving philosophy, we can expect to find nothing but destruction and chaos at the end of the road.

Back in 1831 I had already said: “Liberalism can be fought effectively only by Christianity.” I was accused of reducing political matters to sermons and catechism lessons. I was not surprised by this at the time; but since so many terrifying upheavals have since sounded similar warnings by their thunderous repercussions, I admit that the tenacity of these prejudices have since taken me aback.

Do you want the ideas of 1789? Very well; but you must bring them in connection with the gospel principle.

Do you think democracy is irresistible and should be embraced not opposed? Very well; but if you have to embrace the current state of affairs, do not use it to legitimize the new order of things, or force us to bow the knee before the Democratic idol. Christianity can work with democracy as with any other form of government. But if it is imposed as an absolute and necessary condition of the social order, hailed as a revolutionary dogma, and opposed to God’s law — whose eternal authority must be respected by every sovereign power, be it popular or regal — the democracy of the social contract will always find itself opposed by the Christian faith. The reign of this democracy will always incur the consequences of society described in the chapter wherein de Tocqueville criticizes democracy (devastatingly so, according to Vinet) for having sanitized despotism through the creation of the moral tyranny of the majority. “There will be no independence at all, either for the middle classes or for the nobility, for the poor or for the rich, but an equal tyranny over all.”

Serious-minded Catholics and evangelical Protestants have long and persistently proclaimed this irreconcilable conflict. 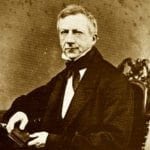 Catholicism's Impotence and the Liberal Revolution
Never forget that most of the abuses of the Roman Church are inextricably bound up with its doctrines, and that its so-called infallibility renders it incorrigible.
Our Conservative Political Principles
We have to choose between the sovereignty of man and the sovereignty of God. Reject sovereignty by the grace of God and you are left with nothing but radicalism...
Groen's Conservative Political Theory
Forsaking the supremacy of the divine, transcendent moral order as authoritative standard for societal and political arrangements in favor of the supremacy of man conflicts with divine ordinances and ...
The Reformation Principle
If we are to defeat the Revolution, we must have the Gospel stripped of all hindrances and set free from the superstitions in which Rome has sunk and distorted it.
2020-10-17T13:41:02-04:00By Groen van Prinsterer|Conservatism|