Written by Andrew HoffeckerScroll down to see more content

Pluralism has found a home among the people of God. While pluralism — the acceptance of nonbiblical ideas and practices as compatible with biblical faith and life — is not a new phenomenon, its persistence in church history and the pervasiveness of its influence today is a matter of deep concern for believers. What differentiates old from new pluralisms is how pluralism was opposed in the Bible and early church but enthusiastically embraced by the church in recent eras.

Evidences of pluralism appeared early in Israel’s life. Idolatry existed alongside traditional worship in the temple in Jerusalem. Israelites worshiped the god Baal through grossly immoral acts and engaged in child sacrifice to the Ammonite god Molech while maintaining a semblance of traditional worship in yearly festivals and sacrifices in the temple (see Jer. 7:8-10). Prophets repeatedly castigated Israel for engaging in magical practices forbidden in Deuteronomy 18. Second Kings 23 reveals the great diversity of idolatrous practices that infiltrated Israelite religion but purged under King Josiah. Prophets called Israel back to the Mosaic covenant as the singular basis for Israelite belief and practice.

In the early church pluralism took several forms. Judaizers insisted that in addition to faith in Christ, Gentiles must also follow Jewish law, particularly the rite of circumcision. Gnostics proposed texts in addition to the Gospels and prohibited marriage and certain foods as the only way to higher spiritual knowledge. Still others insisted on worshiping angels and an array of ascetic rules. Paul attacked pluralism by denouncing it as “a different gospel” (Gal. 1:6-9). He spoke of the Gospel as a singular “good deposit” consisting of “sound words” (1 Tim. 6:3; 2 Tim. 1:13–14).

Contrary to Paul’s teaching, the most recent mantra of church historians is that from the beginning, Christianity was not a unity but a vast plurality in which competing views existed with no need to discern what was genuine and illegitimate. According to this view, each gospel writer expressed a unique perspective on the life of Jesus and His teaching, which differed radically from the others. The Pauline letters represent still another Christianity based on justification by faith. Historians no longer speak of Christianity in the singular. Now they invoke the term “Christianities” each with its respective text, theology, and practice. Only much later did the Great Church emerge, unified in doctrine and practice. “Heresy” and “orthodoxy” were fourth-century innovations — creations of ecumenical councils — and forcefully imposed by imperial decree, which quashed movements like the Gnostics. Since the winners write the history, many of these views were long lost and are only now being uncovered through meticulous historical research.

These historians are clearly wrong in their revisionism. Just as prophets of the Old Testament and Paul in the New rebuked false teachers, so apologists in the early church repudiated rival teachings of the Gnostics. Hippolytus in the early third century wrote Refutation of All Heresies. Irenaeus and Tertullian stand as irrefutable evidence that the church taught a unified message along Pauline lines long before the fourth century. Irenaeus wrote in 185 a.d. that although the church was scattered throughout the world “it occupies but one house, and believes as if it had but one mind, and preaches as if it had but one mouth. And although there are many dialects in the world, the meaning of the tradition is one and the same.” Tertullian (c. 200 a.d.) added: “My first principle is this. Christ laid down one definite system of truth which the world must believe without qualification.” Apologists gloried in the one strand of truth inherited from apostolic Scripture.

Although pluralism appeared in biblical times and the early church, it has exercised an especially potent influence in modernity and postmodernity. Advocates of worldviews alien to Christianity have produced numerous alternatives by introducing various philosophical and cultural phenomena into their reinterpretations of Christianity. Each has claimed that only by including these elements into the faith could Christianity survive. The result was a series of “Christianities” in the nineteenth century that bore more resemblance to the cultural norms of the day than to the historic faith of the apostles.

Immanuel Kant in the wake of English deism transformed Christianity into a rational moralism. In Religion within the Limits of Reason Alone (1793) he contended that only those acts that are explicitly moral count as genuinely Christian. He dismissed the Old Testament; he rejected the historical fall; and he disdained Christ’s substitutionary atonement as the height of moral irresponsibility. People are “born again” — he frequently borrowed traditional terms only to give them new meanings — by converting their innermost disposition to follow the Golden Rule. In addition, prayer, worship, and other devotional activities are superstitious substitutes for correct moral behavior.

When rationalism gave way to romanticism as the primary worldview in Germany, Friedrich Schleiermacher faced a crucial decision. Would he counter the cultural tendency to accommodate to the latest movement by calling the church back to biblical and Reformation principles? Instead of doing so he continued the thrust of modernity forward with another reformulation of the faith — a romantic Christianity in which subjective God-consciousness prevailed over objective doctrinal teaching. The Bible is not the Word of God but a record of human religious experience. Thus, doctrines are not objectively true but expressions of religious consciousness. Like Kant he rejected the fall, and he dismissed Christ’s substitutionary death on the cross as “magical.” In its place he advocated a “mystical” view in which Jesus draws people into the influence of His God-consciousness.

Both Kant and Schleiermacher became models for theological inclusivism, which stood for broadening the boundaries of Christian faith. Theologians and pastors followed their leads by advocating new interpretations of Christianity as equally acceptable to traditional doctrinal statements. Orthodoxy gave way to “tolerance” as the goal of the church. Liberal factions grew until in the 1920s they gained control of the major Protestant denominations.

In the aftermath of liberalism’s success in promoting pluralism within mainline churches, the most remarkable feature of the current religious scene is the extent to which pluralism has made its way into evangelical churches. Several studies (historical, theological, and sociological) have documented changes within evangelicalism — in its colleges and seminaries, and among pastors and theologians. Historically, evangelicalism represented a stalwart effort to resist the incursion of worldviews alien to historical orthodoxy that threatens the integrity of its teaching. The irony of the rising tide of pluralism is that such changes occurred within schools that were founded to combat the ideas that are now gaining acceptance.

The most pressing need of the church in the light of these developments is the articulation of a distinctly biblical worldview — unified, coherent and comprehensive in scope. It would address, in principle, all dimensions of life and thought utilizing biblical content. Such a view rests on the fundamental assumption that God is the creator, providential ruler, and ultimate redeemer of all that He has made. Thus in the Bible He has not only revealed Himself as transcendent sovereign but also as the ultimate source of predication — He stands as the source of truth behind all that can be known. Likewise, He has also revealed an objective law appropriate to who we are and the universe in which we live.

Thus our worldview must not only affirm a correct theology, view of human nature, and means of redemption. Our worldview must extend to all of life, for all of life is religious. Just as James 1:26makes the use of the tongue a test of whether one’s religion is true or not, our ideas and moral behavior do so as well. No matter what academic subject we study, no matter what vocation we follow in life, and no matter what cultural activities we participate in — each has its legitimacy and ultimate order in God’s self-revelation. Our task as twenty-first century believers is to take not only all thoughts captive to Christ (2 Cor. 10:5) but all of life; to make it obedient to Christ and His revealed Word.

If we must take all of life captive to the Gospel, then we must also free ourselves from the competing approaches that avoid or violate biblical principles. Some of these false ways are obvious — atheistic naturalism that reduces reality to mere material, Machiavellian politics that makes power an end in itself, and scientism that attempts to reduce what is qualitative to mere quantitative analysis. More difficult is the ongoing task to ferret out assumptions that subtly infiltrate everyday thought and life — pragmatism in which the ends justify the means or subjective spiritualities that substitute vague feelings or intuitions for clear, logical analysis.

If pluralism has indeed captured the church, the church must respond. The task of developing and acting upon a biblical worldview falls upon us as individuals and collectively as the church of Jesus Christ. Pastors and theologians cannot fulfill the mandate alone. All of God’s people must accept the challenge. Paul addressed his letters to churches as well as individuals. We must therefore be worldview ambassadors corporately in our teaching and preaching, and individually in our everyday vocations. 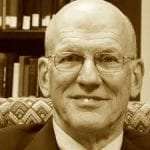 Dr. Andrew Hoffecker is professor of church history at Reformed Theological Seminary in Jackson, Mississippi. He is author of Revolutions in Worldview.

Catholicism's Impotence and the Liberal Revolution