Written by Bnonn TennantScroll down to see more content

An issue that skews Christians’ perceptions of Calvinists is this: Reformed theology is attractive to people with argumentative personalities.

It is not that it only attracts such people; rather, such people tend to be among those who are attracted to it. This especially includes younger men, and intellectual men, who have not yet gained maturity or wisdom in their discourse, or who are accustomed to a more aggressive form of discourse than the typical Christian.

I’m not apologizing for the legitimately angry or mean Calvinists out there. And we should keep our own house in order. But accepting that Calvinism, among all the theological traditions, is where the angry and mean Christians go, strikes me as a case of letting the plank-eyes tell us about our splinters. When I think of all the anger and meanness I’ve personally endured, it has typically been from Christians who are angry and mean about and to Calvinists—not Calvinists themselves.

Many Christians refuse to honor my preferred etiquette of discourse. But how does that make me graceless? Their limp-wristed hand-wringing in the face of assertive argumentation offends me. I would prefer an equally forceful pushback. If they would defend their positions vigorously, I would respect them; but because they do not, and prefer instead to accuse me for “being angry and mean,” I often form the impression that they are fops with no masculine virtues to speak of. Yet I try to avoid saying so. I stick to the arguments, because it is generally graceless to call attention to someone’s failings. So hearing such people accuse Calvinists of gracelessness just strikes me as a farce.

Which brings me to the final point I want to make; niceness is not love.

I believe this entire bizarre cultural issue could be avoided if Christians did not take the following (false) assumption as if it were handed down by God:

It is better to be nice than to be right.

Our eternal fates rest on being right—both in doctrine, and character (cf James 2:14).

But I can’t think of anywhere the Bible emphasizes the importance of being nice. The word doesn’t even appear in most translations.

I believe the concept of niceness has done an awful lot of damage to the church because it is disconnected from any kind of biblical principle. When Christians say we should be nice, they usually mean we should be loving. They are thinking of passages like 1 Corinthians 13. But love is not a sentiment, and turning it into a sentiment—as when we equate it with niceness—is deadly.

If you read the gospels, Jesus is very seldom “nice.” In fact, as I’ve mentioned, he would have been condemned by most Christians as mean and hurtful.

We must build each other up in love, and that theological knowledge without love is pointless. Being right is of no value if one is not actually like God in character. But God’s character is not “nice” as most people would define the word. God’s love is not soft, and he would not have ours be either.

Niceness is getting along for the sake of sentiment. It sacrifices genuine unity for a short-term facsimile, where every man is an island answerable only to God. Needless to say, genuine fellowship, let alone discipleship, is impossible for people who are only interested in being nice. By contrast, biblical love means acting to ensure genuine unity through the Spirit—unity that rests on rightness of doctrine and rightness of character. Unity is achieved through discipleship, which means exposing and killing wrongness of doctrine and wrongness of character—ie, sin.

But when exposing and killing sin is the loving thing to do, “nice” people bail. Because exposing and killing sin is often hurtful and divisive. So let’s stop worrying about being “nice,” and start thinking about how to be right, and how to help others help us be right. This might also have the unintended side-effect of giving Christianity its teeth back in the broader culture, as opposed to the current state of affairs where we are quietly accepting the secular pillow pressed into our face. Christianity is on the brink of full-scale persecution in the West because we have accepted the lie that to love people means to say nice things about them; so if we’re saying something that upsets anyone, we’re not being loving. No wonder the offense of the gospel has utterly no influence anymore. 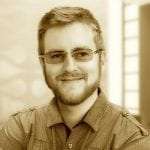 Bnonn, a former outspoken atheist, is now Christian, husband, father, and entrepreneur living in Te Awamutu, New Zealand. He writes about theology and philosophy and is “In the Habit of Goring” with a sharp, two-edged sword.

The Protestant Doctrine of Alienation and Vocation