Patricide is at the heart of modernity’s impiety. Fallen man is at enmity with God and thus seeks to kill God and recast himself as the divine creator. This immediately places man at war with nature and history, for both testify to man’s limitations as a creature, his very real reliance upon the true creator, and God’s hand in history. 20th-century author Richard Weaver writes:

First of all, I would maintain that modern man is a parricide. He has taken up arms against, and he has effectually slain, what former men have regarded with filial veneration. He has not been conscious of crime but has, on the contrary — and certainly this is nothing new to students of human behavior– has regarded his action as a proof of virtue.1

The most vocal part of modern impiety is the freely expressed contempt for the past. The habit is to look upon history in the same way that we look upon nature, as an unfortunate inheritance, and we struggle with equal determination to free ourselves from each.2

Contempt for the past may be the most vocal facet of modernity but it is not the underlying root. To genuinely appreciate the spirit of the age one must dig a little deeper.

Rebellious and patricidal, modern man can be defined in three ways: he is Promethean, he is Dionysian, and he is Oedipal. These terms should be explained in the reverse order from which they are provided.

Oedipal man, following the Greek myth of Oedipus, seeks to kill his father and commit incest with his mother. This ancient mythology was for Sigmund Freud the driving force behind all human behavior. Whether Freud understood it literally or symbolically is not always clear, but regardless, it offers a helpful insight into the actions of sinful men. As already noted, sinful man is at war with God. Even the very creation reminds man of God, His sovereignty, and His presence. This total ownership and total presence on the part of God means that fallen man is in total enmity to God. In order to win his war, he must kill God and become master of the created order. Of course, this is impossible because man is made from dust; he is finite and subject to decay and eventually death. Subject to these inherent limitations, man’s autonomous rule can only be an unnatural one. And just as Oedipus’s unnatural rule was symbolized in his taking of his own mother, so too does modern man seek to supplant God by exerting an unnatural rule over God’s creation. Frederich Nietzsche, the 19th century German philosopher, gives insight into why man, in order to supplant God, must defile all things.

With regard to the mother-wooing, riddle-solving Oedipus, an immediate interpretation comes to mind, that here through the oracular and magic powers the force of both present and future, the rigid law of individuation as well as the magic of nature is broken, the preconditioning cause is that beforehand a monstrous act against nature — something on the order of incest — must have taken place; then how is one to force nature to reveal her secrets other than by victoriously going against her, that is, through an act contrary to nature. I see this recognition sketched out in that hideous trinity of Oedipus’s fate: the same man who solves the riddle of nature — that double-edged Sphinx — must also violate the holy order of nature as both parricide and spouse of his mother. Indeed the meaning of the myth seems inescapable, that wisdom and especially Dionysian wisdom is an unnatural horror, and that the man who through his knowledge plunges nature into the abyss of annihilation, experiences in his own being the disintegration of nature. “The point of wisdom turns against the wise; wisdom is a crime against nature.”3

For Nietzsche, true wisdom is a crime against nature and leads to man’s ultimate annihilation. He gives us a clue when he defines this deadly and criminal wisdom as Dionysian. For it is not the wisdom which is hid in Christ, the lawful Creator of all things, but rather it is a “crime against nature” and a “monstrous act.”

These monstrous acts play themselves out all around us. From our society’s obsession with representing father figures as malevolent tyrants (a form of patricide) to its insatiable appetite for the sick and depraved. The trajectory of Oedipal man is an ever-heightening crescendo of willful, self-conscious, and intentional defiance of the will of God.

Having cast off the true wisdom found in Christ, man turns instead to the Dionysian wisdom which Nietzsche earlier pointed to. Dionysus was the Greek god of sensuality, madness, and religious ecstasy. David, writing in the forty-sixth Psalm, instructs the righteous to be still and know God. Elijah the prophet knew God not as a raging wind or burning fire, but rather as a still and small voice.  In contrast to this, the worship of Dionysus elevates the sensual, the ecstatic, and the irrational. Modern man is insane and he knows it. The very earth itself and the wonders of creation declare God’s glory; therefore, they cannot be considered logically or rationally. In order to drown out the “still small voice,” man’s life must be a crashing orchestra of carnality and sin. It was customary for the virgins of Greece to dance naked on the mountainsides in honor of Dionysus. Clearly this sensuous spirit is pervasive in our land today.

The third prevalent force in modernity’s rebellion is Prometheanism. Prometheus was a figure in Greek lore known for his mischievous creations. The Greeks ascribed to him the creation of mankind. And subsequent to creation, Greeks believed he taught them to rebel against Zeus. Prometheus’ rebellious creations were instigated by his own rebellious nature. This parallels to modern man’s tendency to invest his creative energies into perversion and mischief. God gave man the capacity to be creative, to add refinement and glory to the world established by God. But man would rather not see his creations bring glory to God, so instead he walks a Promethean path. Much like Viktor Frankenstein’s monster, the works of man’s hands have become as wondrous and magical as they are monstrous and unnatural. This is by design. From the ugliness of much modern architecture to the willful distortions of Picasso, man seeks to create a world that does not reflect the image of God but himself. If man can build a synthetic and fake world, if he can pervert, mar, and degrade everything that God has given him, then maybe, just maybe, he can silence the testimony of the witness of God in this world.

Modern man’s rebellion is a magical quest. He has denied the natural things given him of God, and has instead turned to the unnatural ways of Oedipus, Dionysus, and Prometheus. In his quest to kill God man must become the magician, employing these three unnatural spirits in his war to overthrow reality. C. S. Lewis well describes the magical underpinnings of man’s rebellion:

There is something which unites magic and applied science while separating both from the “wisdom” of earlier ages. For the wise men of old the cardinal problem had been how to conform the soul to reality, and the solution had been knowledge, self-discipline, and virtue. For magic and applied science alike the problem is how to subdue reality to the wishes of men: the solution is a technique; and both, in the practice of this technique, are ready to do things hitherto regarded as disgusting and impious — such as digging up and mutilating the dead.4

Lewis again hints at the distinction between that wisdom which is from above and that which reflects the spirit of Oedipus, Dionysus, and Prometheus. The former being lawful, obedient, and receptively creative: in short, pious. The latter being mischievous, sensuous, and magical: in short, patricidal. The distinction between pious man and patricidal man is that the pious man seeks to bring his behavior into conformity with the natural order God established, while patricidal man seeks to conform reality to his own fallen nature. In his quest to kill and replace God, patricidal man is willing to do things heretofore regarded as “disgusting and impious.”

Christians today must be extremely careful that in their efforts to rebuild upon ancient foundations they do not include in their construction materials any of the corrosive elements which rebellion has amassed to itself. They must put away that wisdom which Lewis termed magical and which Nietzsche styled as a crime against nature. Failure to do so will only be to return to the same path that has led to this current state of ruin. 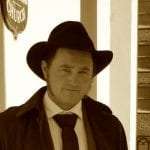