Written by Jacobus DeJongScroll down to see more content

The year 2001 marks a special anniversary of the life of one of Holland’s most important leaders and statesmen: Guillaume Groen van Prinsterer. Born in 1801, Groen’s life and work stood at the forefront of the issues and struggles making up the middle and later part of the nineteenth century in Holland and Europe. For the most part he was a man of the book, and retreated to the private life of study and letters. But as a scholar and historian, he wrestled with the issues that shaped the culture and life of his day, and in that sense he can be said to be leader of his age. Further, he belonged to the aristocracy, and spent many years as a member of the House of Parliament defending the Calvinist and scriptural values he had come to love so much through the course of his studies and lectures. He died in 1876, and so this year marks not only the 200th anniversary of his birth, but the 125th anniversary of his death.

Groen is perhaps best known for his lectures on Unbelief and Revolution which he held privately to a small audience that regularly travelled to his spacious home in The Hague. Groen later published the lectures and they went through two editions in his lifetime, with many more following his death. 1 They reveal Groen as a thorough and well read scholar, who did not shrink back from tackling the leading issues and philosophes of the day, both French and German.

The lectures grew out of Groen’s interaction with the fundamental principles that contributed to the founding of the Dutch national state. As secretary to the king and royal archivist, Groen immersed himself in Holland’s constitutive documents, became fervently Calvinist in outlook, and pro-Orange in political persuasion. But underneath all this, ever since his so-called “conversion” to the faith in early 1832, Groen was one who sought to be guided by principles. In fact, the guiding motif of his work represents for him one central principle, the principle of ultimate loyalty and obedience to God that God requires from every human being.

Groen reasoned that all human life with all its special gifts and treasures comes from God. All authority and institutions of government are accountable to him. Therefore the whole duty of man is to honour justice and truth as embodied in divine law. The path to wholesome living in a social context begins with faith, which for Groen is uncompromising trust in the one God revealed in Scripture and the gospel promise He has promulgated in the world through his preachers.

From this principle comes Groen’s so-called Christian principle of causality in history. Whenever a nation or national grouping turns to unbelief, revolution results. This has been termed Groen’s covenantal causality: if one leaves the way of the covenant, he reaps the harvest of violence and revolution. The revolution destroys its own children. The sage said it long ago: “Where there is no guidance, a people falls” (Proverbs 11:14).

Groen then set forth what he saw as the only political alternative supported by the gospel: the anti-revolutionary standpoint. That term brings us to the heartbeat of Groen’s social and political testament. One who stands with a positive commitment to the gospel message de facto must have a negative or antithetical position against the revolution and its essential spirit. For Groen, the revolution is fundamentally an alternative first spawned in the world of ideas. And although he traced the destructive trail of the outworking of this principle in human life through the nineteenth century, he always went back to what for him was the chief example of the idea of revolution spawning widespread havoc and upheaval in the social order, the French Revolution of 1789. That revolution like no other concretely demonstrated how deceptive, how cruel and ruthless in essence those catchy phrases were: liberty! equality! fraternity! – in the end, all that came was a trial of blood that someone once called the natural result of the violent assault that broke such a horrifying wound in the heart of Protestant Paris on the night of the massacre of St. Bartholomew in 1572. The revolution destroys its own children.

Although Groen towers above his contemporaries in the nineteenth century as a committed anti-revolutionary, yet he sought at the same time to develop and promote what he saw as the positive Christian political alternative, which he termed the Christian-Historical alternative. What did it say? If I may paraphrase him somewhat, Groen’s essential point is: although we are not conservative traditionalists, yet the Christian gospel along with its social, legal and cultural implications has embedded itself, through the special providence of God, in the history of this world, and the mores and habits of a Christian social order must be built up out of and through the means of those principles as they have been realized in the historical continuity of human existence. In other words, although Groen did not opt for a slavish return to the political order of the late sixteenth century in Holland, he insisted that the reformational principles uncovered in that period must be revived and reapplied in a nineteenth-century context. This involved the application of the principles of Scripture in the light of the unfolding of those principles in specific historical situations of past generations, specifically in the period of the great Reformation.

On this point Groen was a firm defender of Christian isolation. “In our isolation lies our strength,” he claimed, and then confirmed his words by his dramatic departure from his ethical-irenic co-religionists in the evening of his life (1871!). Why would Groen, who normally was willing to work with other Christians, even Roman Catholics, and was often mild and tolerant in his outlook with regard to cooperative efforts with others, suddenly no longer work with the broader Christian conservative party? He began to feel encroached by the spirit of compromise which the conservatives were foisting on the Reformed party. For Groen, cooperation was limited by the principle. You could cooperate with anyone, but all in the context of the inviolable and unbending allegiance to the anti-revolutionary principle. On that point a Christian could not give in, not for a moment. The gospel stands diametrically opposed to the revolution, and only by consolidating thought and action around this principle could the Christian alternative have a place in the world. Hence his slogan: in our isolation lies our strength.

The man most often hailed today, even in the American context, as holding the prospects for Christian revival and reform is Abraham Kuyper. 2 That in itself cannot be faulted! Kuyper was a great statesman, a brilliant strategist, next to being a principled and towering Christian leader in his era. But Kuyper cannot be understood in the essence of his program without going back to Groen. To be sure, Kuyper brought Groen further. As the strategist, Kuyper, more than Groen, knew how to capitalize even on what Groen saw as the regresses in political and social-economic systems and structures. For example, he knew how to exploit the emergence of humanistically based democratic principles for Christian ends. But it was Groen who devised and set forth to the western Europe of his day the very essence of the anti-revolutionary principle, as a political and cultural viable alternative. Groen was the builder, Kuyper the populist. Groen laid the foundations, Kuyper erected the Christian (i.e., Reformed) nineteenth-century house, and so all-pervasive was the influence of that house that it simply could not be ignored in public life, and cannot be ignored even to this very day.

Religion in the Public Square

We now live in a day when the politicians have done their worst to remove religion from what Richard Neuhaus has called “the public square.” The Christian alternative has barely a voice, although, remarkably, it always resurfaces in the most unexpected channels and ways. The evangelical voice, especially that voice which along with the basic gospel tenets includes an integral communal component, will not be silenced. And the more people try to erase God and Scripture from the public square, the more God himself proves and demonstrates that this cannot be done.

Groen for his part defended the union or close proximity of church and state, that is, such an aggressive cooperation of the two spheres that the government would unvariably live and act in a Christian way, according to biblical principles. That ideal too has long faded from view. His prophesy has only proven to be so tellingly true: unbelief leads to revolution, and the revolution leads to the steady breakdown of all social relationships. In the end even the most violent predator not only gets his day in court (which he should) but he gets to live for the rest of his days in a “luxury hotel” at the state’s expense – that is, if he is not released on parole at an earlier date for ostensibly good outward behaviour.

We cannot revive Groen’s ideals, tainted as they were by an idealism and romanticism that slightly tilted to the side of the Revéil movement so popular in his day. But we can do one thing in remembrance of Groen, and also of those who stood for the same ideal before and after him: we can defend the anti-revolutionary principle. Living as we do in the middle of a godless age, we can speak, act, pray, write and live against the revolution, and so for the gospel. Then religion – and here I mean especially true religion – may no longer be discussed or even be permitted to be discussed in the public square; but it will have its witnesses, even if they lie slain in the street, Revelation 11:8. For those who uphold the testimony may die, just as, at God’s time, Groen did. But the principle itself, the life and community principle for which he lived and stood, that will never die. That is the certainty and hope that drives us on.

*This essay was previously published by Christian Study Library. Used with permission. 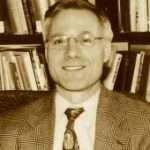 Dr. Jacobus “Jack” DeJong served the church as pastor of congregations in London and Burlington from 1978-1990 and as a professor at the Canadian Reformed Theological Seminary in Hamilton from 1990-2003.