The Authority of the State

Written by Cal ThomasScroll down to see more content

The late philosopher-theologian Francis Schaeffer taught me to always begin a discussion with a definition. The reason, he said, is that different people define the same word in different ways. Dictionary.com defines authority as “the power to determine, adjudicate, or otherwise settle issues or disputes; jurisdiction; the right to control, command, or determine.”

In modern politics, one has authority if he (or she) wins an election. It is conferred upon the elect by our Constitution. But this authority lasts only as long as the person continues in office. When the term is over, the authority expires. Scripture commands us to be “submissive to rulers and authorities, to be obedient, to be ready for every good work” (Titus 3:1–2). At once this is a witness to others and an acknowledgement that all authority is from God, which He establishes to suit His purposes. No higher an authority than Jesus said so when He stood before Pilate and said, “You would have no authority over me at all if it were not given to you from above” (John 19:11).

In perhaps the most profound statement on the Christian’s relationship to government, Paul wrote, “Let every person be subject to the governing authorities. For there is no authority except from God, and those that exist have been instituted by God. Therefore whoever resists the authorities resists what God has appointed, and those who resist will incur judgment” (Rom. 13:1–2).

There are limits to submission, such as when civil authorities order one not to preach the gospel, or when a Christian is ordered to do something ungodly (Schaeffer used the example of a Christian nurse who is ordered by the hospital for which she works to participate in an abortion. He said she must refuse even if it costs her the job). For centuries Christians have debated whether they should submit to illegitimate authority, such as a dictatorship. Paul wrote under a Roman dictatorship, so does the question answer itself? Does that mean Christians were acting rightly when they hid Jews from the Nazis? Were they rebelling against God when they lied to the Gestapo? Greater minds than mine will have to answer that one. I would have hid them, lied to the Nazis, and let God sort it out at a later time.

These things are sometimes easier to process in theory than in practice.

Divorce is one example. Statistics indicate as many Christian marriages are breaking up as those in the unsaved world. This is because too many of us choose to ignore Paul’s admonition to submit “to one another out of reverence for Christ” (Eph. 4:21). By submitting to one another, we put the interest of the other person before our own and acknowledge the claim of the Higher Authority — Jesus Christ — to whom we all must submit either in this life, or certainly in the life to come.

Submission is more powerful than “lording it over” someone else. Some years ago while visiting with an editor at a Florida newspaper I was trying to persuade to take my syndicated column, I met a young Christian on the staff who told me he was thinking of resigning because no one paid attention to him on the editorial board. He said he was thinking of going into “full-time Christian service.” The phrase has always made me gag because all Christians ought to see themselves in full-time service for Christ, regardless of their profession.

I asked him if he ever considered submitting to his colleagues by serving them. Did he know the name of his boss’s wife? Did he know how a colleague takes her coffee in the morning and would he get her a cup? Could he go out to lunch with his associates and feel he had presented a good witness if the subject of God never came up, but he took the time to find out about them and not push his own agenda, even a religious one?

I heard from him a year later. He tried all of these things and was subsequently promoted to a New York Times newspaper where he had even more opportunities to appropriate God’s power by submitting to the needs and interests of others. I have had difficult bosses in my professional life, and with few exceptions (and there was one!) I was able to soften them up by submitting to their authority far more easily than if I had been rebellious and defiant.

Why do authorities exist? It is because we live in a sinful and fallen world, and without authority everyone would do “what is right in his own eyes,” resulting in chaos. Those who will not be constrained from within by the living presence of Jesus Christ, must be restrained from without by the state, acting under God’s ultimate authority, in order to “promote the general welfare,” in the words of the Constitution’s preamble.

We have seen the consequences of those who abuse their authority, from Members of Congress who go to jail for breaking the law, to dictators who are brought down by a raging mob, to Justices of the Supreme Court who see themselves as the ultimate authority and decide what the Constitution says, rather than submitting to what it does say.

One of my favorite verses on this subject is found in Luke 7. The order is important. First we are told that a centurion’s servant who was highly valued by his master was sick and about to die. The centurion had heard about Jesus so he sent some elders of the Jews to ask Him to come and heal the man. At first the Jewish elders tried to appeal to Jesus based on earthly and temporal considerations: “[The centurion] is worthy to have you do this,” they said, “for he loves our nation, and he is the one who built us our synagogue” (vv. 4–5).

Jesus went with them, and as He went the centurion sent friends to Jesus to say to Him: “Lord, do not trouble yourself, for I am not worthy to have you come under my roof. Therefore I did not presume to come to you. But say the word, and let my servant be healed. For I too am a man under authority, with soldiers under me: and I say to one, ‘Go,’ and he goes; and to another, ‘Come,’ and he comes; and to my servant, ‘Do this,’ and he does it” (vv. 6–8)

Upon hearing this, Jesus exclaimed, “I tell you, not even in Israel have I found such faith” (v. 9). When the men went back to the house they found the servant had been healed. The centurion understood authority and so when he saw an authority greater than his own, he submitted to that authority.

No greater verse on authority exists in Scripture than what Jesus said about Himself: “All authority in heaven and on earth has been given to me” (Matt. 28:18). And what did Jesus do with that authority? He ordered us not to lord it over others, but rather to “go therefore and make disciples.” He didn’t ask us to make converts to our point of view, especially our political point of view. He didn’t ask us to organize a band of brothers to take over the government and show those pagans a thing or two (which is what the disciples were hoping Jesus would do with Caesar and his Romans). He didn’t require us to make the world a better place or to enlist in causes.

He said, “Go therefore and make disciples.” That is hard work, but it is the only “work” Jesus asks us to do. Causes are easier, politics may be more fun, but He said to make disciples. Are we under His authority, or our own? You can’t “Yes, but” to Scripture. He said it, or He didn’t say it. And we either obey, or we do not. It is not we who have the authority. It is the Lord. His name is Jesus and His title is “the Christ.” And He has it all. He will share it with no one. The beauty of this is that the more disciples who are made, the greater the influence on society. God does things in opposition to man’s thinking and agenda.

Jesus said if we love Him, we will do what He tells us to do. Do you love Him? Prove it by submitting to His authority. 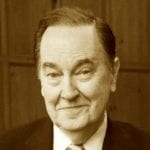 John Calvin Thomas is an American syndicated columnist, pundit, author and radio commentator. He has written 10 books, including Blinded By Might, and was the Vice President of The Moral Majority.

Marxism Alienates the Worker From Home