The racial reconciliation movement within the church is supposedly intended to reconcile white people to black people. It’s apparently designed to rebuke racism within the Church and culture. But it’s doing the exact opposite.

By now, you’re probably familiar with the fallout from Sparrow Women’s conference. The controversy surrounding that event is actually a good illustration of what the racial reconciliation movement is really producing within the Church.

Ekemini Uwan is the co-host of the Truth Table’s Podcast, and she’s written articles for The Witness: A Black Christian Collective, Huffington Post Black Voices, and Christianity Today.

The fallout from the Sparrow Conference stems from Ekemini’s words during an onstage interview when she said:

Ekemini Uwan wouldn’t describe her words as racist. That’s in part because like many within the racial reconciliation movement, she doesn’t believe black people can be racists. She believes only white people are racists—and she doesn’t think that notion is racist either.

The critical theory and Marxism have become a driving force within the racial reconciliation movement. Despite all evidence, many refuse to accept this fact. But at the end of her onstage interview, Ekemini recommended books by two self-proclaimed Marxist authors, David R. Roediger and Noel Ignatiev. And her colleague, Jemar Tisby has openly embraced James Cone’s heretical, Marxist Black Liberation Theology.

Evangelical leaders within the racial reconciliation movement haven’t addressed some of these divisive and destructive philosophies and rhetoric. And though there is more evidence of anti-white racism than anti-black racism in the Church today, not a single evangelical leader within the racial reconciliation movement has shown any apparent interest in addressing anti-white racism.

The Sparrow Conference was intended for racial reconciliation, but it ended in disaster. And in the same way, the racial reconciliation movement as a whole is actually producing racial tensions in the church. The American Church is more divided on race today than it was 5 years ago.

I am convinced that’s because we’re abandoning biblical theology for wordly philosophies and political agendas that cannot unify God’s people the way the gospel does. And that’s the point, isn’t it? Racial reconciliation has already happened on the cross. Jesus Christ has reconciled Jews to Gentiles, black people to white people, all people together for God. We simply need to believe it and live like it.

Therefore, we need to put on Christ and put off every argument, every lofty opinion, every thought that isn’t captive to Christ. Otherwise, we’ll idolize Whiteness and Blackness and become Christless. 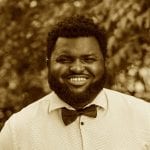 My name is Samuel. I am a Ghanaian-Canadian currently residing in Brampton, Ontario, a great city just outside of Toronto. I blog mostly about Christ and culture, and my articles have been featured on Challies.com, SovereignNations.com, StatementOnSocialJustice.com, Wretched.org, EzraInstutute.ca, BooksAtAGlance.com, Desiring God’s Nightly Brief, and more.

The Problem With Critical Race Theory Pt 2
This is Part 2 of the discussion regarding Critical Race Theory. This article is a continuation discussing Delgado and Stefancic’s discussion on “nationalism,” followed by a brief discussion of “white...
Racial Reconciliation's Stumbling Block
Racial reconciliation can easily lead to racial manipulation. Joseph Conrad addresses this concern in a grand tale of a crew of shipmates at sea. Perhaps Conrad's most important work exposes a difficu...
Does Systemic Racism Exist?
The concept of systemic racism today has become underlined by a form of cultural relativism, a concept defined by perceptions, not proof. Under this new definition, black people—not God—are the author...
The Problem With Critical Race Theory Pt 1
This influence is in American academia in the college syllabi that seek to understand history, literature, religion, etc. through lenses that critique capitalism, Christianity, individualism, and soci...
2020-12-03T06:30:46-05:00By Samuel Sey|Racism|